It’s the first week of May in Northwest Arkansas which means that it’s time for the Bentonville Film Festival.  Yes, this once small town which grew to be full of corporate imports of all kinds is now sharing that space with MOAR corporate people and some film industry types.  It’s very weird, to say the least.

At the Bentonville Square you can see hipsters of all kinds, modern day yuppies, corporate shills with branded clothing and accessories front and center, writers/actors/directors having “important” conversations on their Bluetooths on street corners, and inspiring writers/actors/directors who are trying to catch someone’s eye (and honestly, how cool would that be for someone) – or maybe just hear whats going on around them.

You can also see the old school Arkansans who’ve lived here since birth, still work their farm, and could tell you stories about Sam Walton (the founder of Walmart and the reason for this whole mess of people mixing around the square) back in the day.  Then you have those yocals who possess no hipness, couth, or nativeness,  but LOVE to people watch and then people snark.  I am one of those people.  And I will tell you there is no better time to people watch here in Bentonville than at the BFF.  It’s the weirdest collision of cultures you’ll ever see. 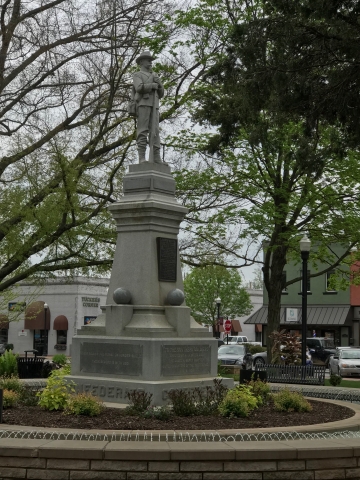 . . . and the confederate statue people sit near in the square 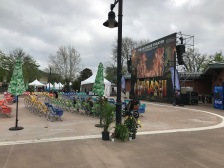 Movies at the splash park. 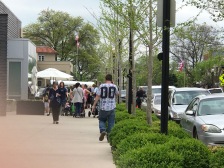 The courthouse and a guy taking a ride

Some guys want to talk to everyone about this book

I wish I could fully paint the picture of just how oddly wonderful the whole scene is.  It’s The South meets Corporate America meets Not-As-Cool Sundance.  Or to use films: it’s Three Billboards meets Office Space meets Garden State meets Wall Street.  It’s all very interesting to watch.  I do wonder how many local businesses in the area actually see profit from this festival or if it’s all just a clusterf*ck of self promotion where the only people who get ahead are the people who . . . are already ahead.

If you ever want to come to a film festival, see some beautiful trails, visit a wonderful modern museum, and watch wardrobes range from yoga pants, Neiman Marcus outlets, Kids Gap, thrift store, “my assistant picked this out for me”, or your standard jeans and t-shirt, Bentonville Arkansas is the place to be right now.  There isn’t anywhere else I’d rather be.

One thought on “It’s the Most Multicultural Time of The Year: Bentonville Film Festival Edition!”