I’ve spent most of my life swallowing anger until it fermented into a unique blend of sad, bitter, and isolated – suggested pairings are spoonfuls of Nutella straight from the jar and wearing pajamas for over 24 hours.  Anger seemed to me to be a scarything.  It could be destructive and hurtful.  I’d seen it happen both in and out of my home when I was growing up.  My parents never raised a hand against me but they didn’t know how to process their anger either.  I’m guessing it was the same for

their parents too (it’s a age-old, time honored tradition, passed down from generation to generation).  So here I am, an alleged adult, still afraid of conflicts and confrontations (which I equate with anger) because I learned that nothing good came from those things.  I didn’t see the value and usefulness (when used properly) of anger until recently.

I don’t want to go into detail but I do because the anger is in the details and to fully express it, I have to actually, fully express it.  My mom, who loves me and who raised me the best she could, was upset with me.  She was upset because I had put my depression out there for everyone to see.  It made her ashamed, not of me, but of herself because she saw it as a recrimination of her failings as a parent.  She didn’t want me to publish anything else about it, or her or dad.  And she refused to acknowledge that I have a mental illness.  It caused her pain just to hear me say it to

her.  I told her it was who I am, it was what I had to accept and I needed her to see me for who I really was, which made her cry.  This made me furious . . . not of the fast variety, mind you.  But I was furious nonetheless.

I’ve spent the entirety of my life trying to minimize myself in everything with the exception of physical size.  I became an expert at being able to emotionally read a room so I could disarm any eruptive situation.  I made sure to think things over (and over and over) fully before addressing any issue I could possibly have lest I speak hastily and hurt someone because I was overly emotional instead of logical. Emotions – anger in particular – had to be controlled because emotions were hurtful and destructive. In other words, I’ve spent a lot of time and effort to not be who I 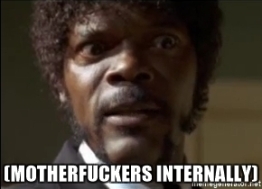 really am but some sanitized version of myself that is safe for public consumption.  The “I’ve had it with these monkey-fighting snakes” version of Erin.

I went quiet on the phone towards the end of this conversation even when it turned towards more pleasant topics.  I felt effectively shut down.  I wanted to hang up the phone in the middle of what she was saying.  I was so mad I thought about hanging up and not speaking to either of my parents for a while.  Usually I’d feel guilty about even having that thought but this time I felt justified.  I had a right to be outraged.   I finally understood the root of these feelings: every time I’ve ever felt that way, I was silenced (even by myself).

There’s a Maya Angelou quote about anger that I’ve always loved but never really thought about in practice.  “Bitterness is like cancer.  It eats upon the host.  But anger is like fire.  It burns it all clean.”  Bitterness can be anger that turns inward and festers.  You never get clear of it because it’s always with you.  And because it stays with you it grows.  But when you unleash and use it, anger is cleansing.

To clarify: Hulking out and destroying things (or hurting someone) is NOT the proper use of anger. If you have a punching bag or something you can use to that end, go ahead I guess. I know there are many people who take that energy and funnel it into exercise or art. But if you’re angry at someone who you love or like or even just have

to tolerate (because you have to work together even if Paul clears his throat constantly AND spits in his trash can and keeps cups of chewed-up sunflower seeds on his desk AND you can smell his moldy clothes from across the aisle but there isn’t any good way to tell a coworker that plus he gets all clingy when you talk to him and your day has been long enough) if you’re angry and unable to let go of it, then it’s better to tell that someone about it than swallow it down. Because you just get bitter and that person you’re angry at won’t know why.

The next time I talked with my mom I was upfront with her about how that conversation made me feel. After that I didn’t feel angry at her, I felt relieved. We might not have seen eye to eye on some things but we knew where we stood.  I’m learning how to use my anger and my words like a real, live grown up.  Hey, you guys, I’m LEARNING!